LEGO released two new train sets in 2018 after 3 years, the 60197 Passenger Train and the 60198 Cargo Train. Both sets are equipped with the new Powered Up system that has Bluetooth connection instead of the infrared connection of Power Functions. The new system has a dedicated remote but can be also controlled with a smartphone/tablet app. We’ll see the new system in details later, now let’s have a look at the train set!

The set comes in a fairly big box with the train and the (very) small station visible on the front. The dimensions of the box are 58 x 38 x 9 cm, it weights 2 kg. 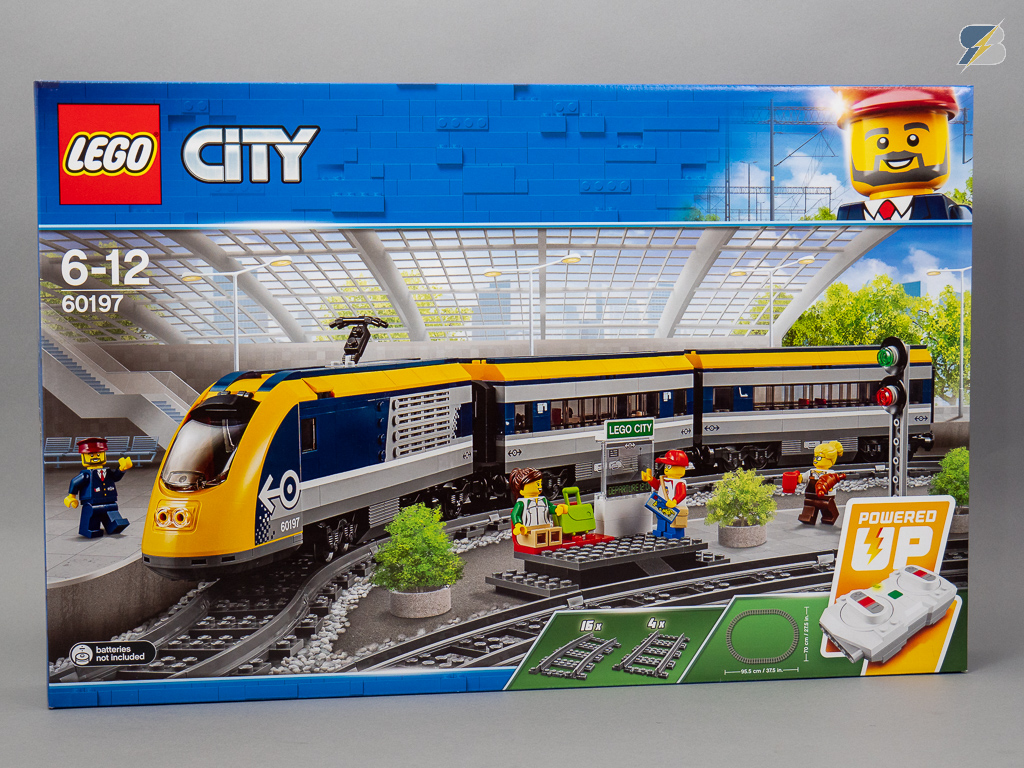 A lot of details are visible on the back, you can see the minifigs in different scenarios on the train and on the platform as well. There’s some basic information about the Powered Up system and some additional sets that can be used to extend the set. 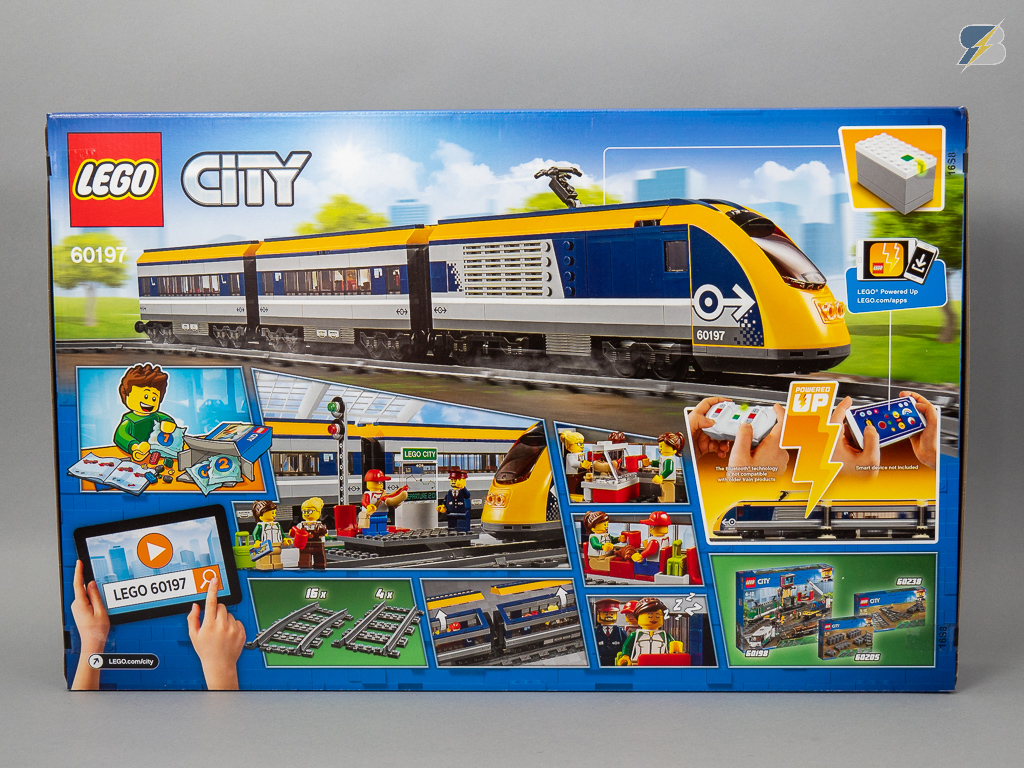 As it is indicated on the box you need to have a compatible tablet or phone to run the Powered Up app. Since the new remote uses Bluetooth connection you won’t be able to control the previous Power Functions equipped trains since they had infrared connection. 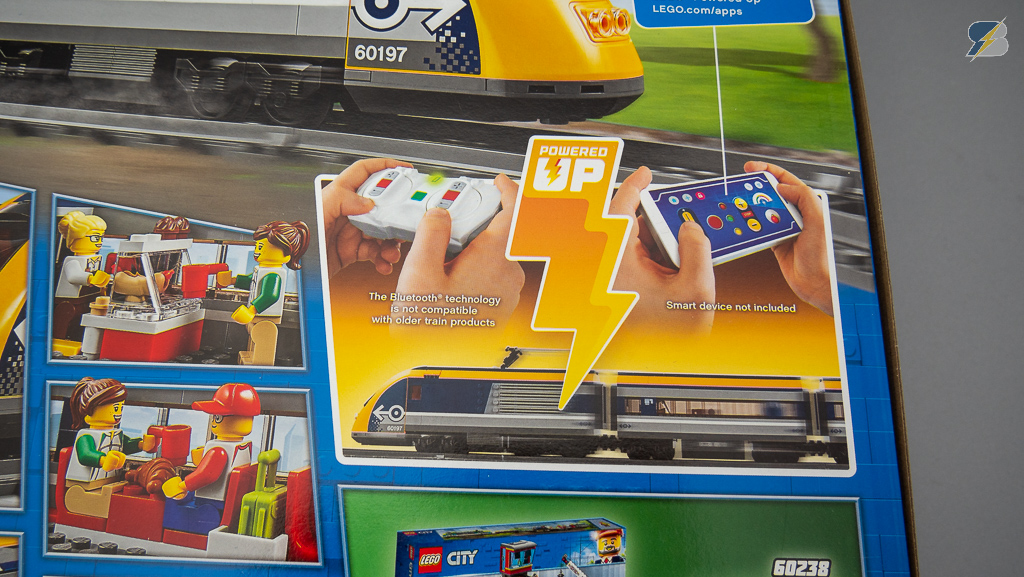 Inside the box there are 7 numbered bags, an unnumbered bag with some bigger pieces, the tracks, the Powered Up components and the manuals. 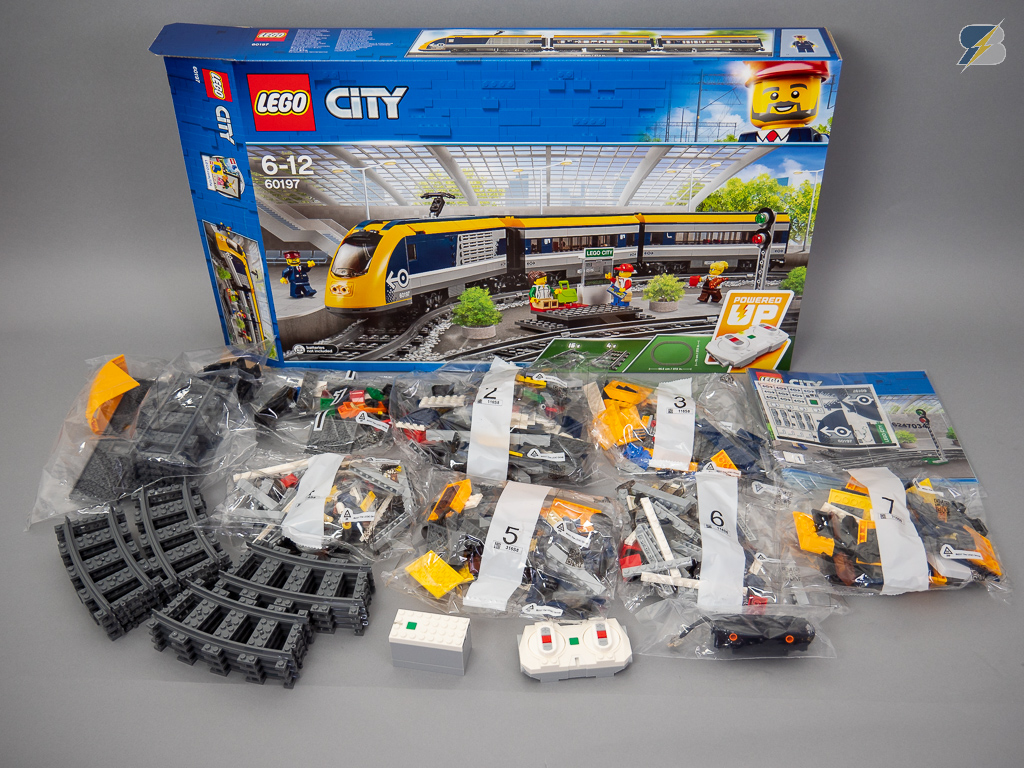 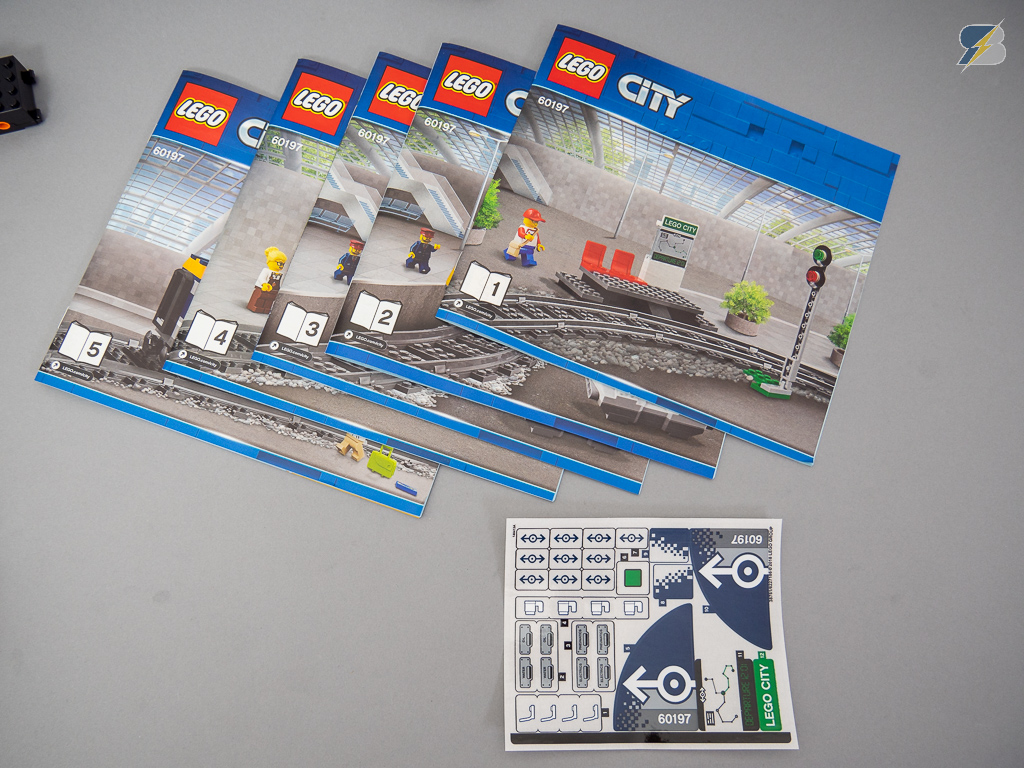 You’ll need an impressive amount of 10 AAA batteries to run the train, this is 1 more than the previous Power Functions trains. 4 batteries needed for the remote and 6 for the hub. Both units have their cover secured with screws so you’ll need a screwdriver to open them. 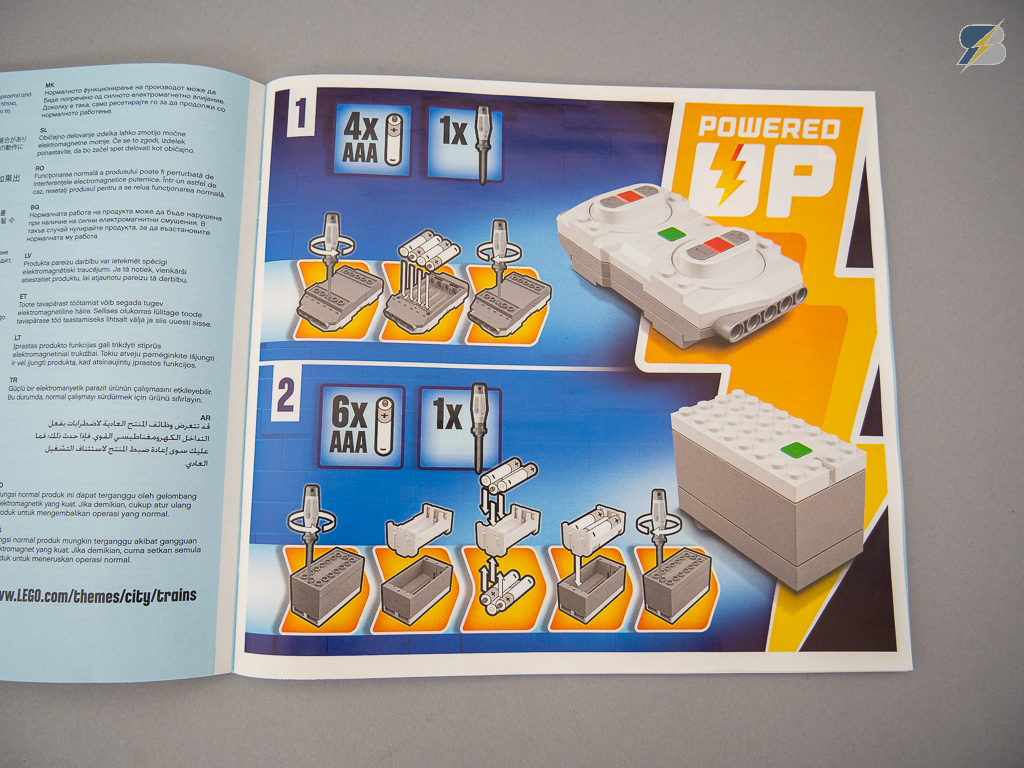 On the next page you can see how to pair the remote with the hub, how to control the train (it has 10 speed levels), how the hub will indicate when the battery level is low, and how to turn off the units. Interestingly some additional operations are not shown in the manual, like the switching of channels or how to unpair the remote and the hub. Check out the video to see this in action. 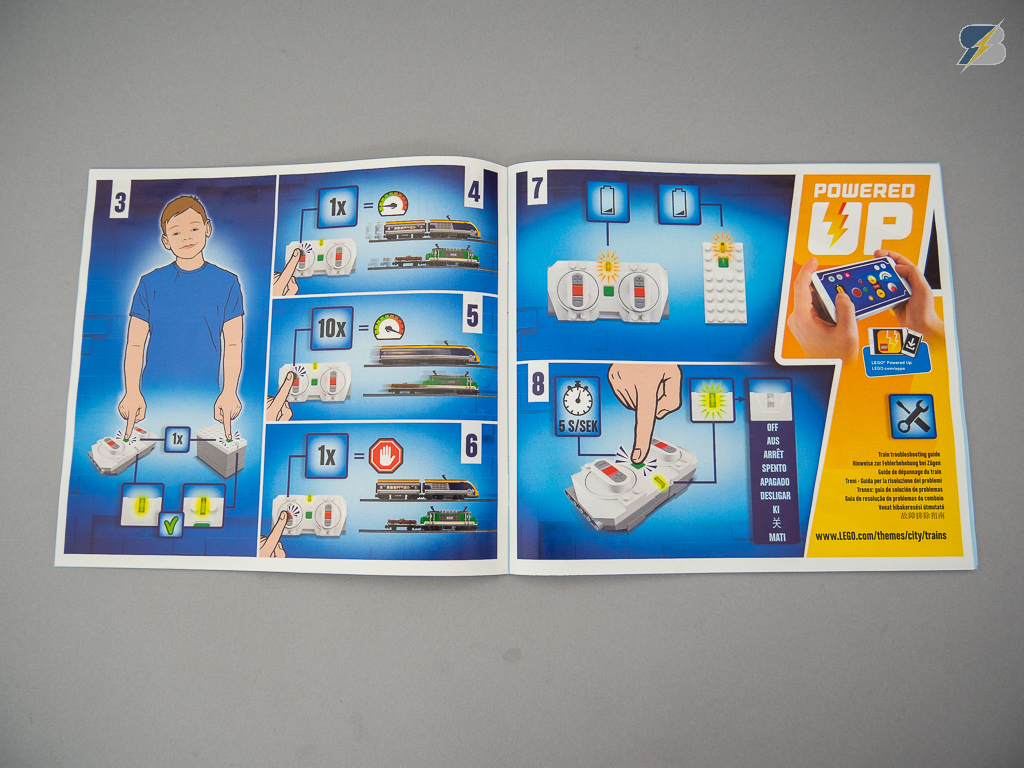 The new Powered Up hub has the same size as the previous Power Functions AAA battery box. It has two connectors on one end. Since the new connectors are not stackable, currently this is the maximum amount of components that you can attach to a hub. 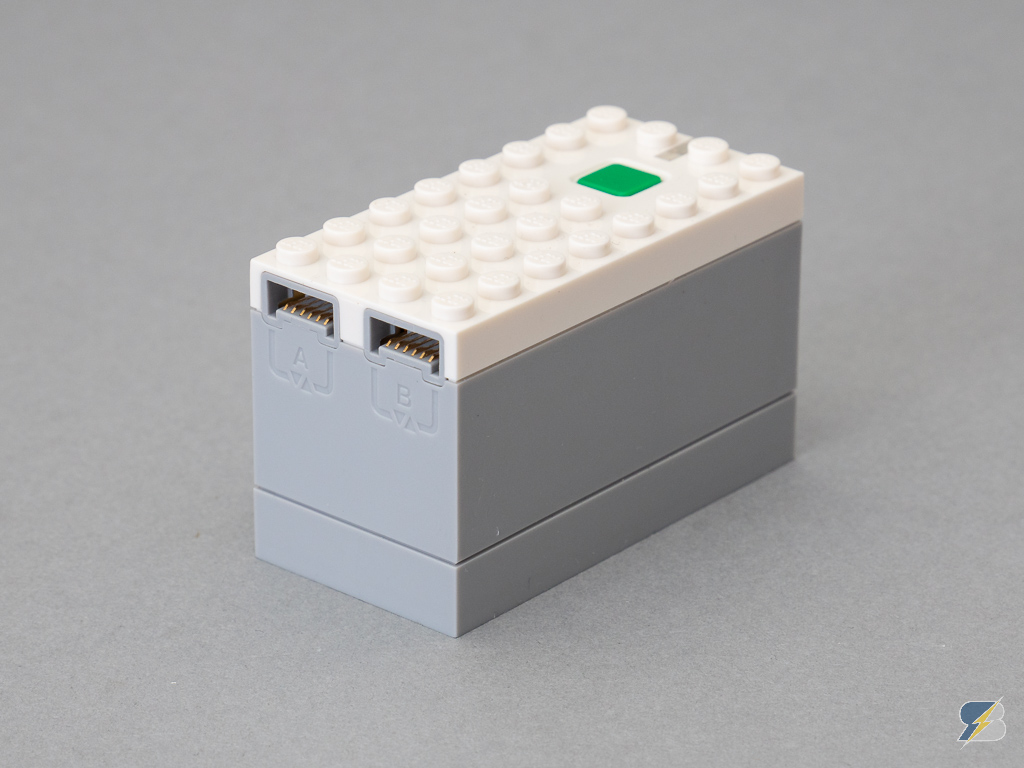 The remote is smaller than the previous Power Functions train controller. Instead of the dials it uses buttons, and the base of the buttons can be rotated. It gives you some additional options to hold the controller in your palm for one-hand operation, or in the future to turn one side 90 degrees for steering control. Unlike the previous Power Functions train controller you don’t have any visual feedback about the current speed applied. 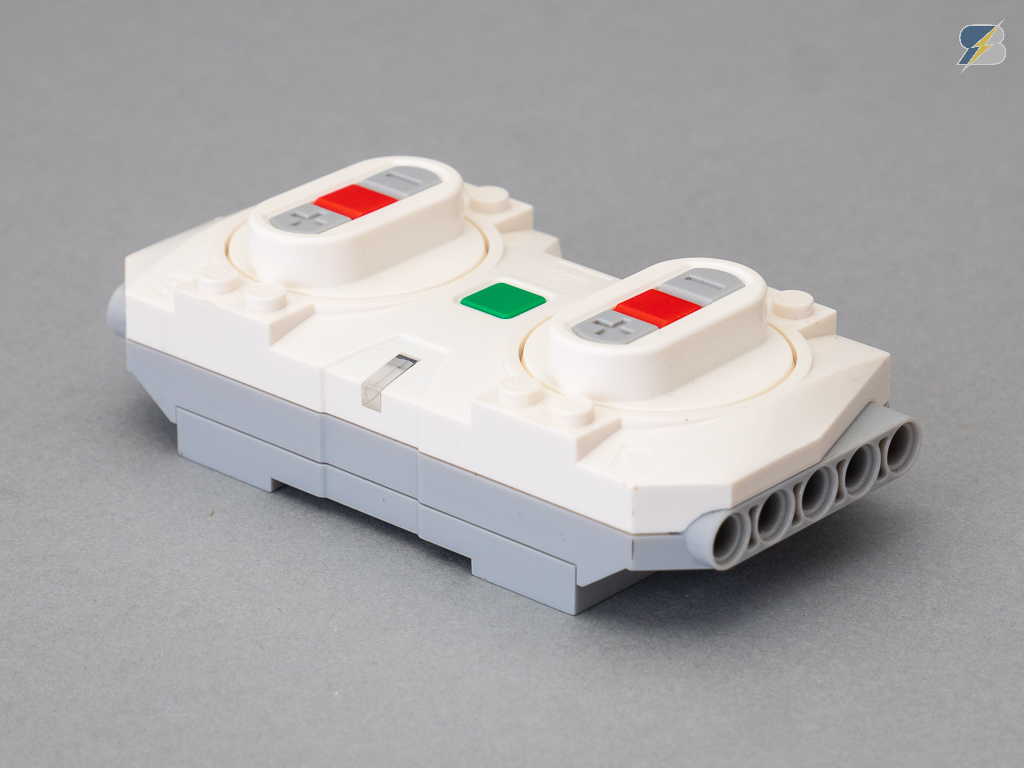 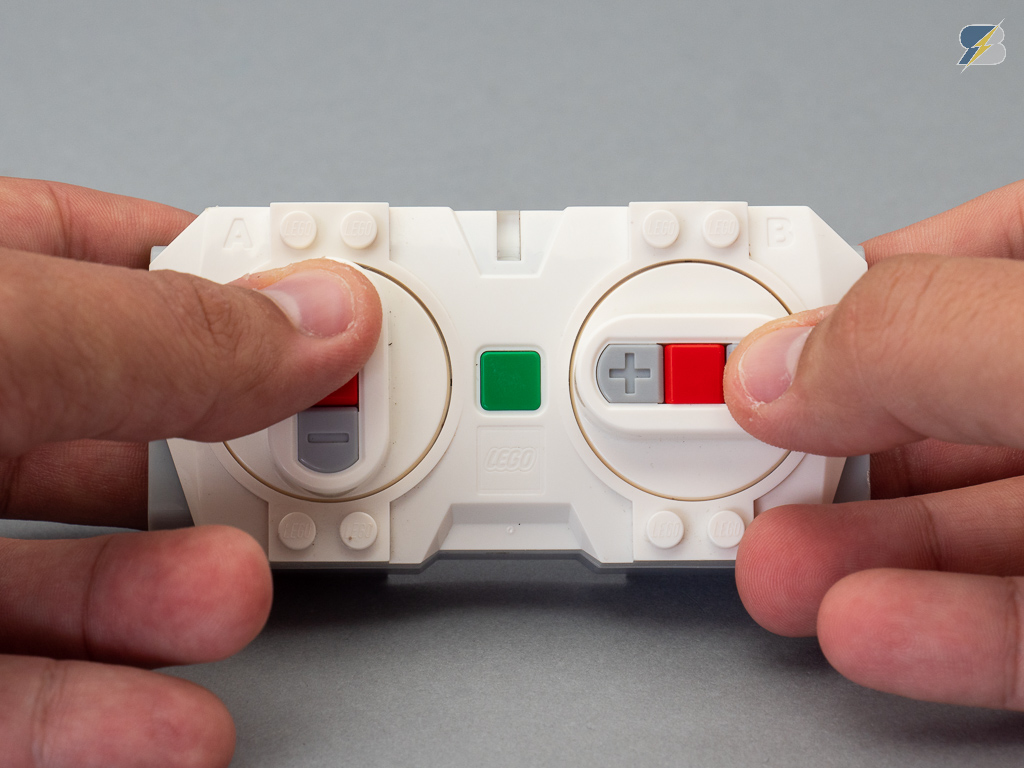 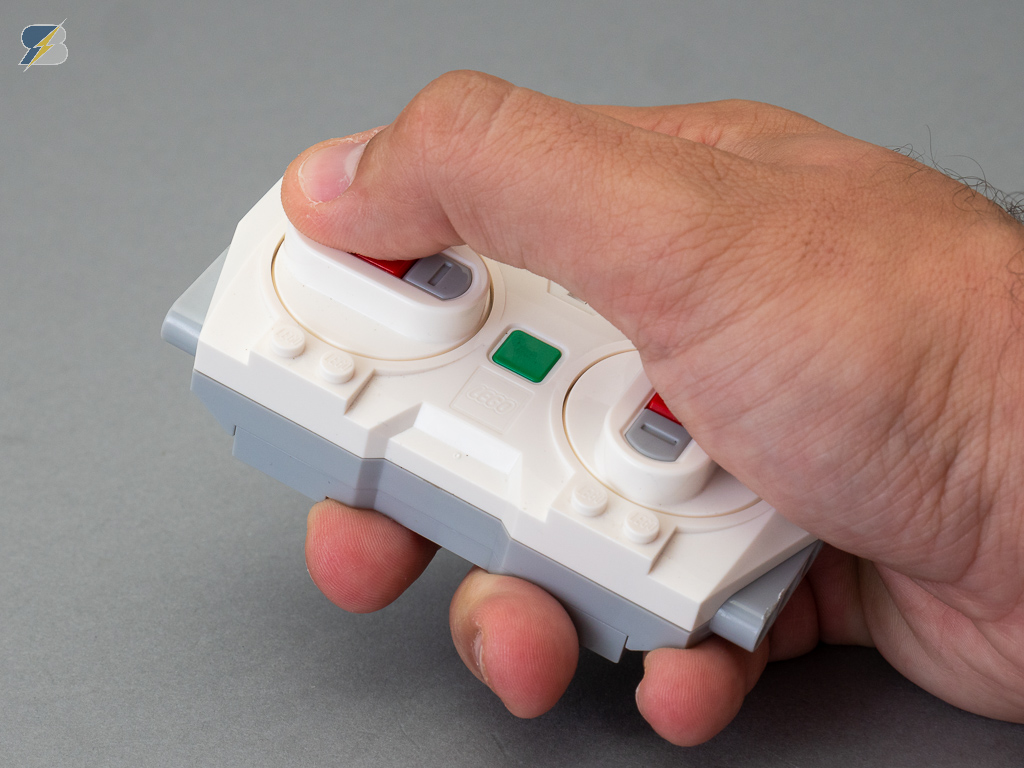 I also tested the operating range of the new Powered Up system, it has a surprising control distance of 50m! Check out this video for the details:

The new train motor is pretty similar to the previous one, only the cable and the connector is upgraded. 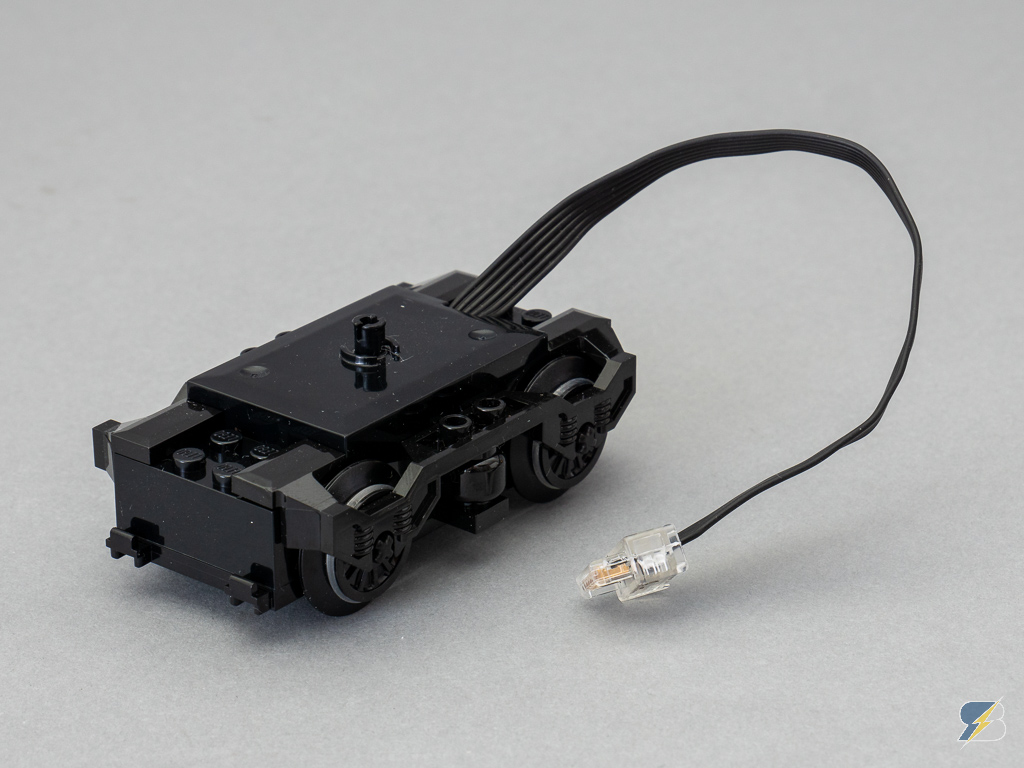 There are four minifigures and some accessories in the box 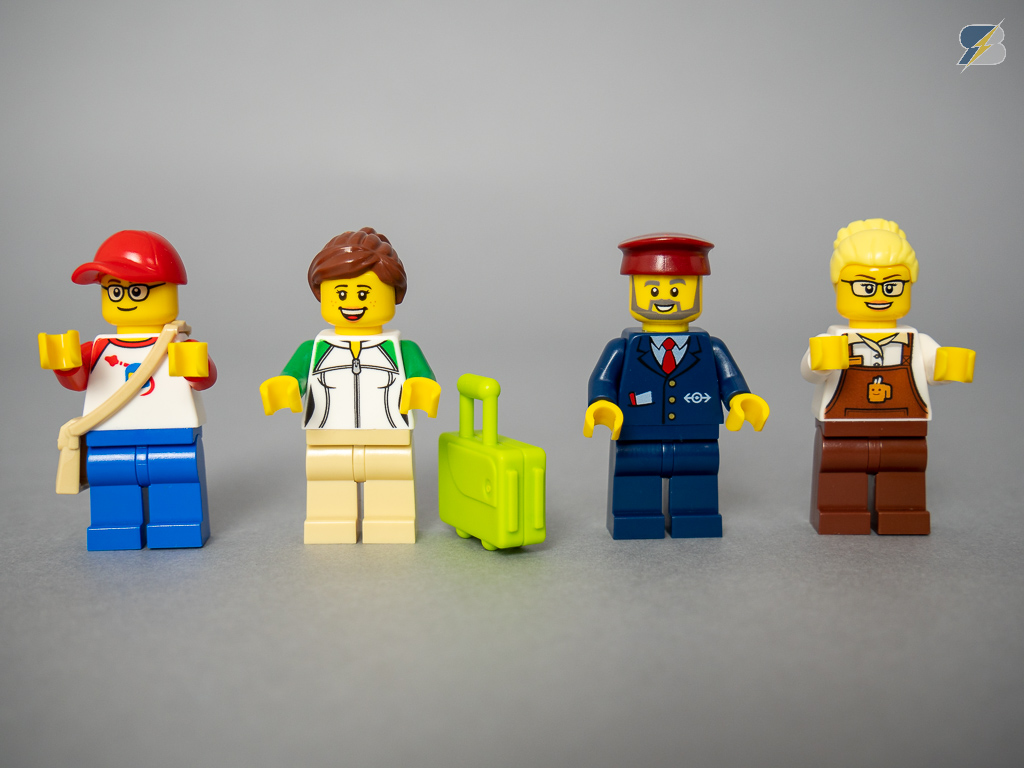 The boy has a cool classic LEGO Space t-shirt. The lady is the only figure from the set who has an alternate face, as you can see she has a sleeping one as well to take a nap in the passenger car. 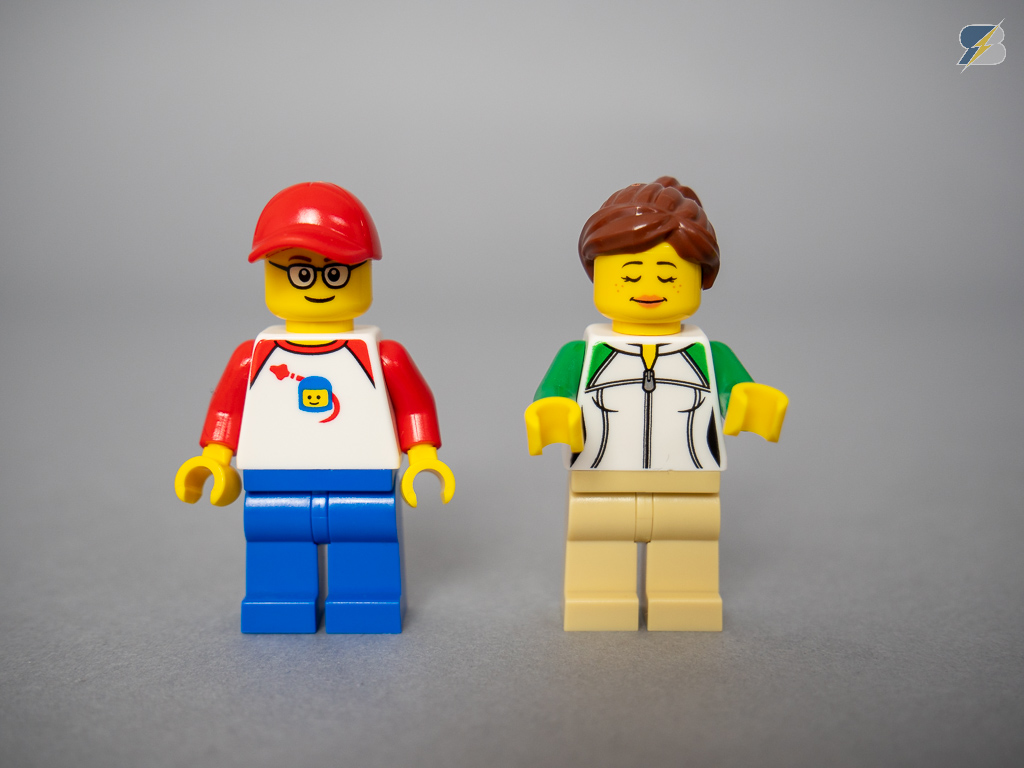 The bag is a cool new accessory, it also has a printed tile inside representing the box of a LEGO set 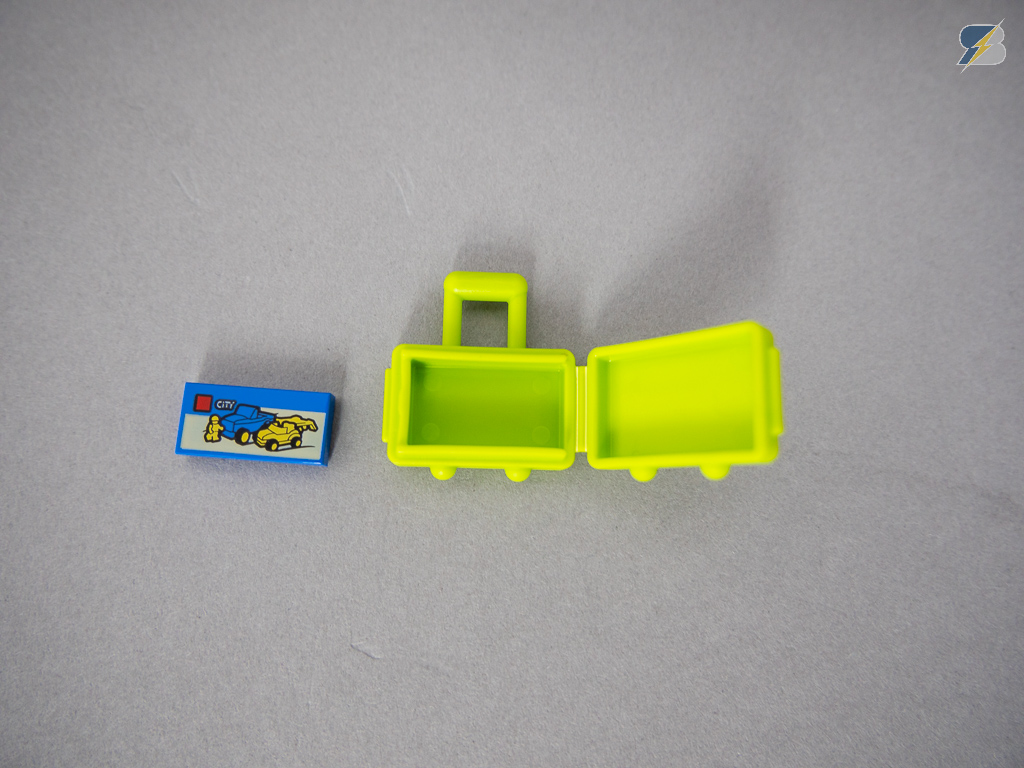 You can watch our recorded live build to see the building experience, it took ~1.5 hours for my son to complete the set

The station is probably the most disappointing part of the set. it is very minimalistic, it has barely any features. Apart from the lights there are no additional buildings or accessories. 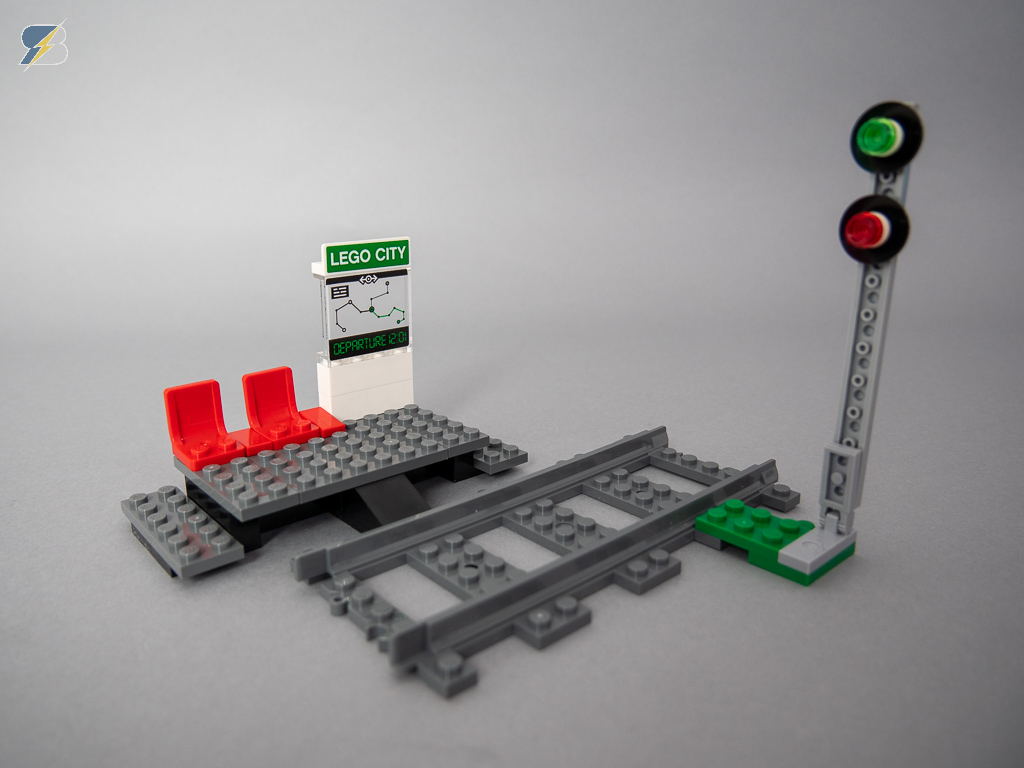 The locomotive has a nice brick built color pattern with some stickers and a single big piece in the front. Unfortunately there’s no space inside for the passengers, only the driver sits in the front. 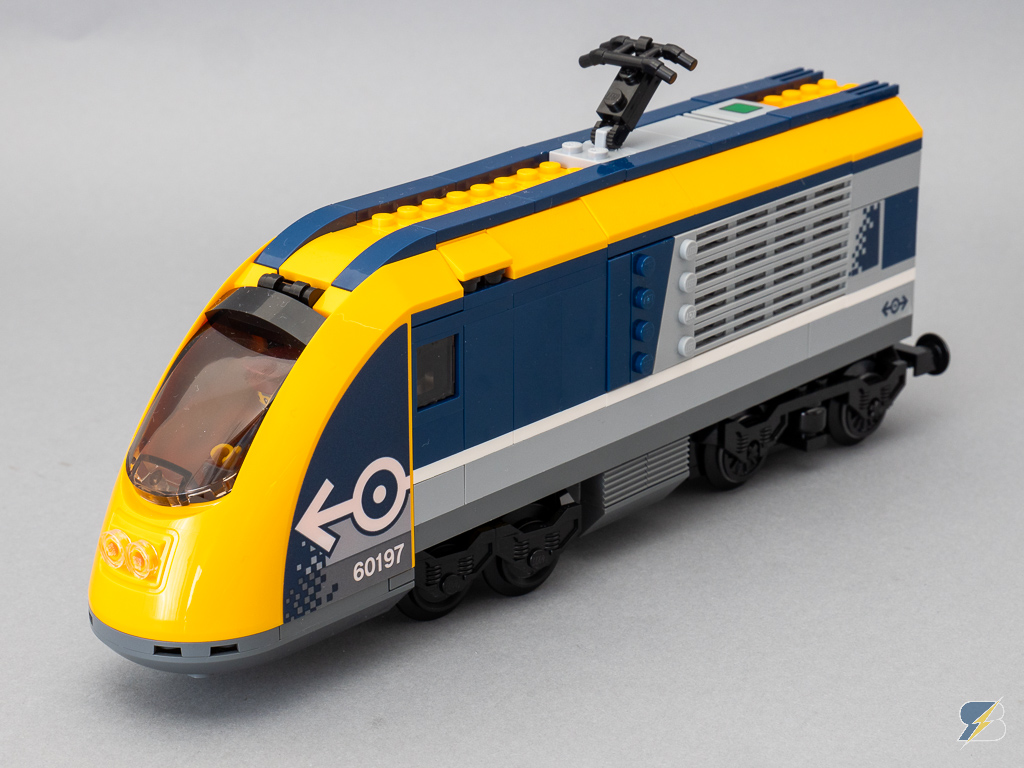 The hub can be easily removed to access the battery compartment 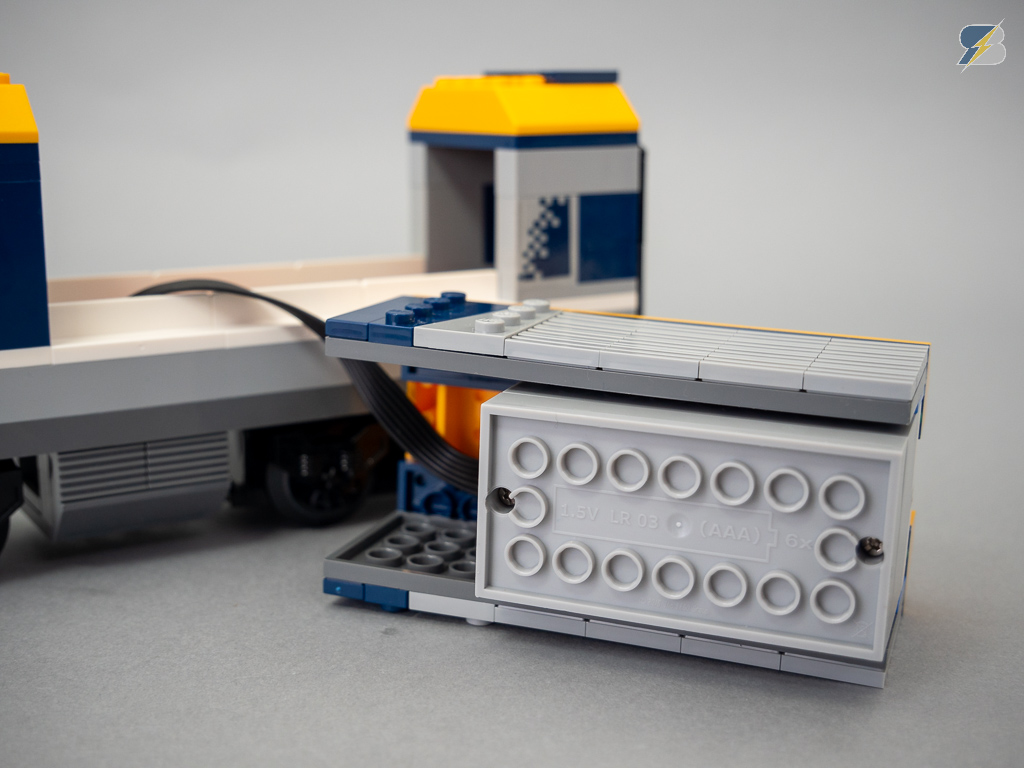 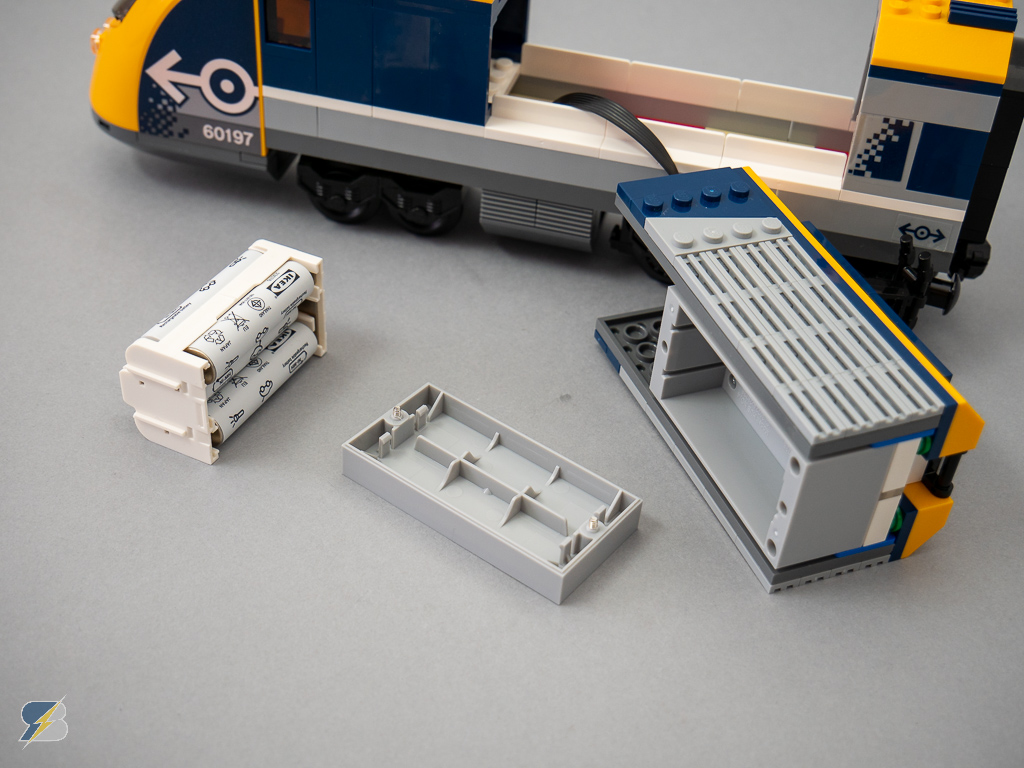 The battery holder has some notches on the side that helps with the proper alignment – one on one side and two on the other. 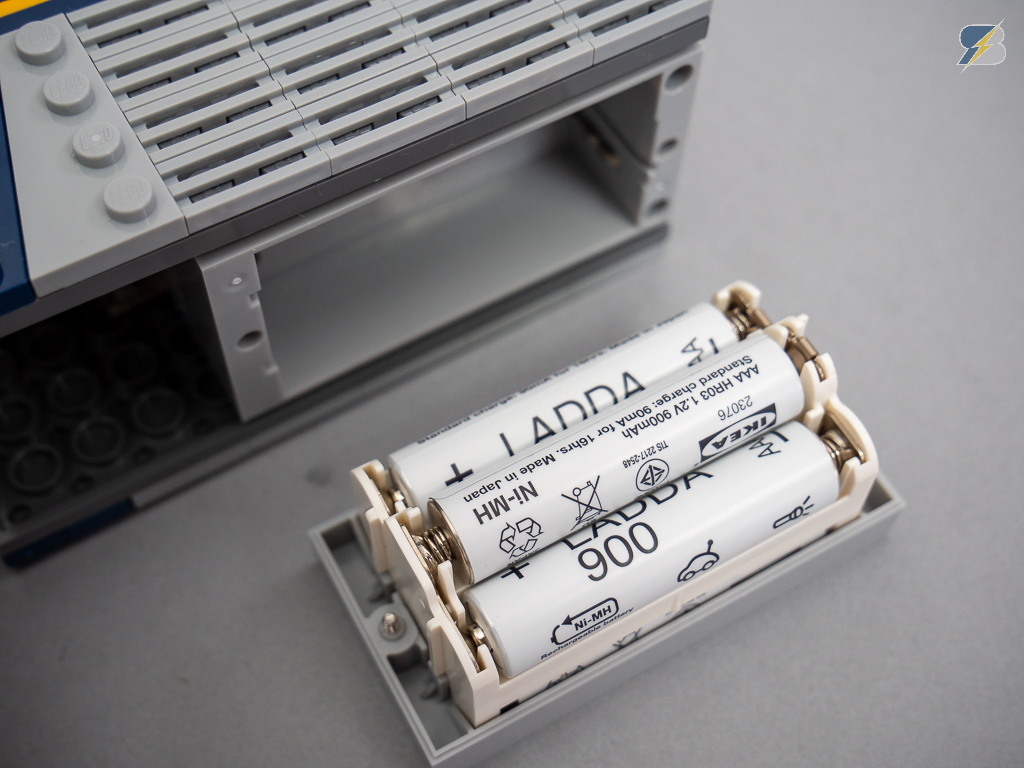 The café car is the next one with a removable roof and some tables. 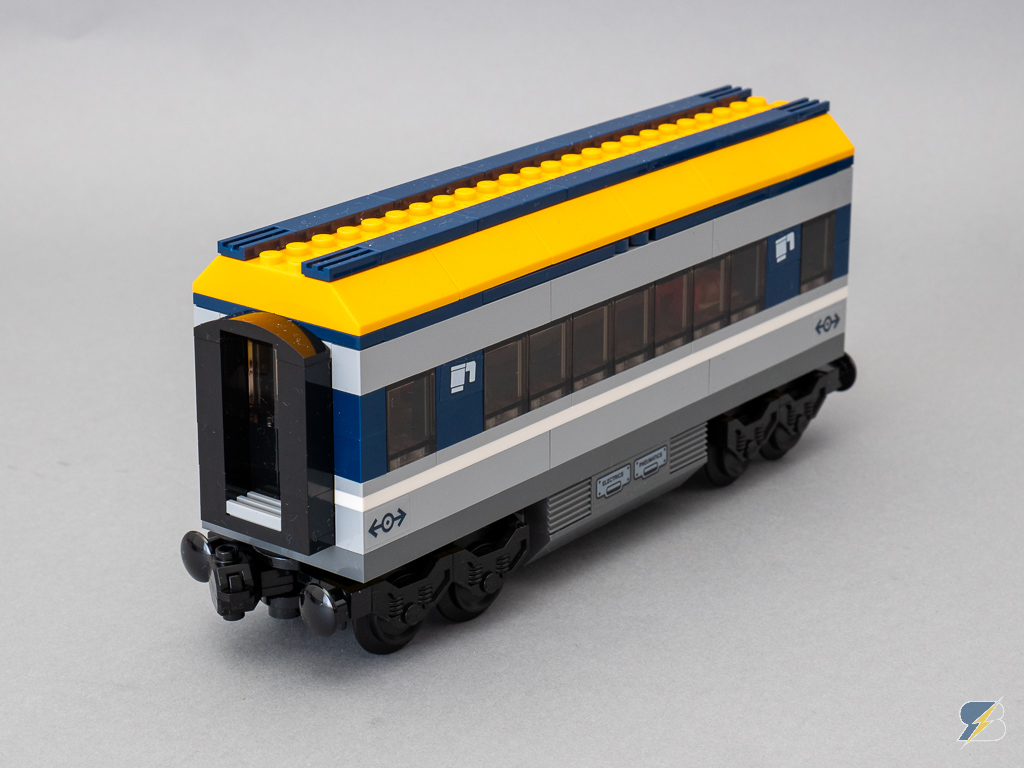 There are some nice details inside like the croissant, the cupcakes, the hot dog and the coffee machine. 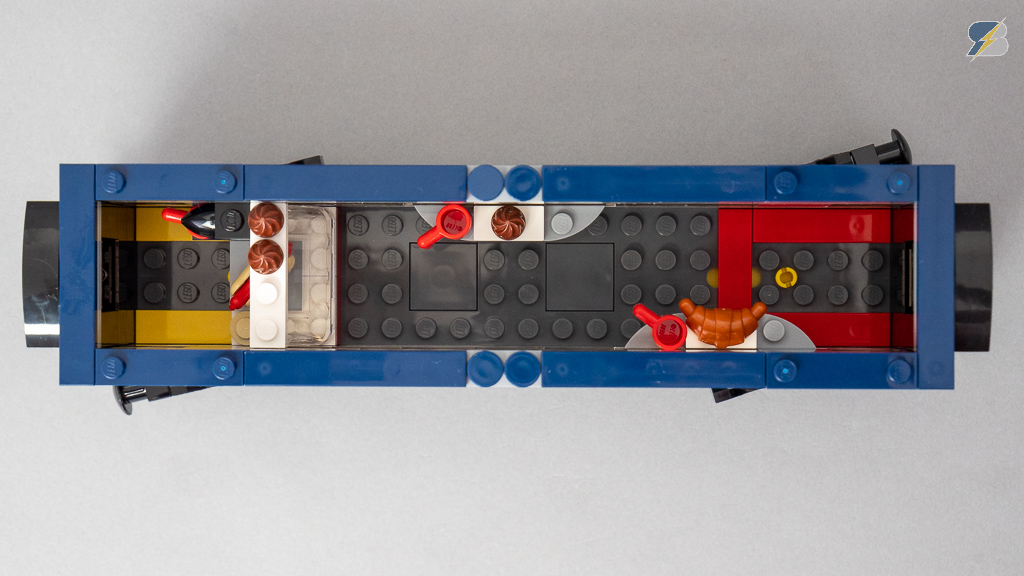 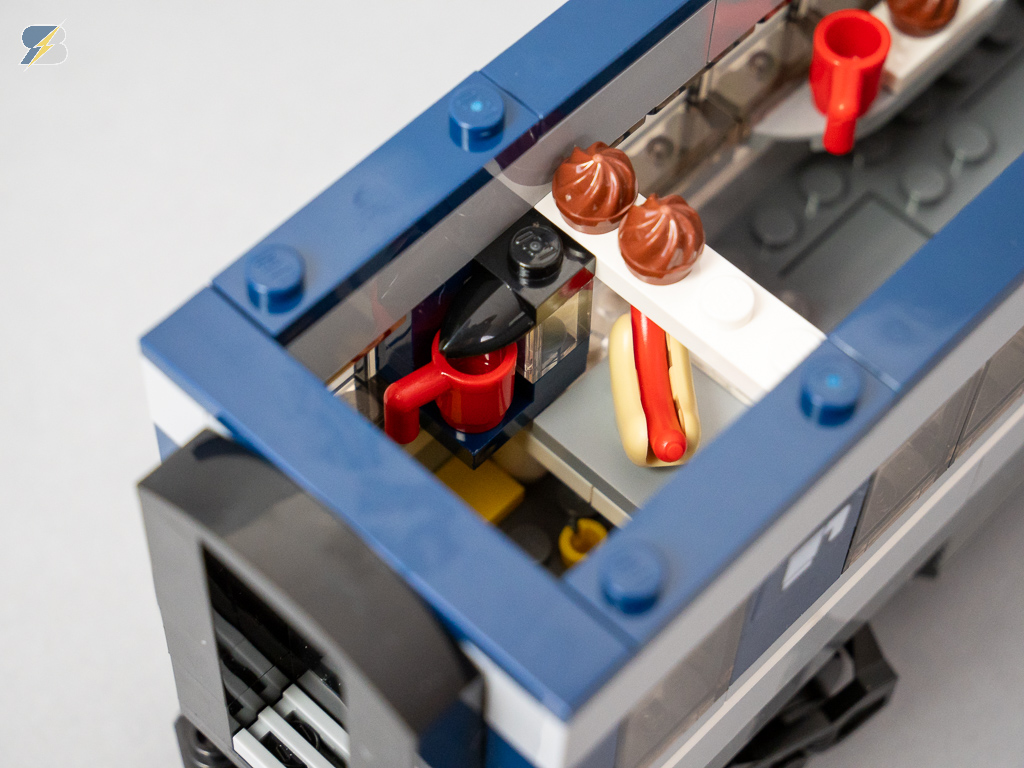 The passenger car also has a removable roof. Inside you won’t find many details, only some seats and tables. The only extra feature is a luggage holder in the middle. 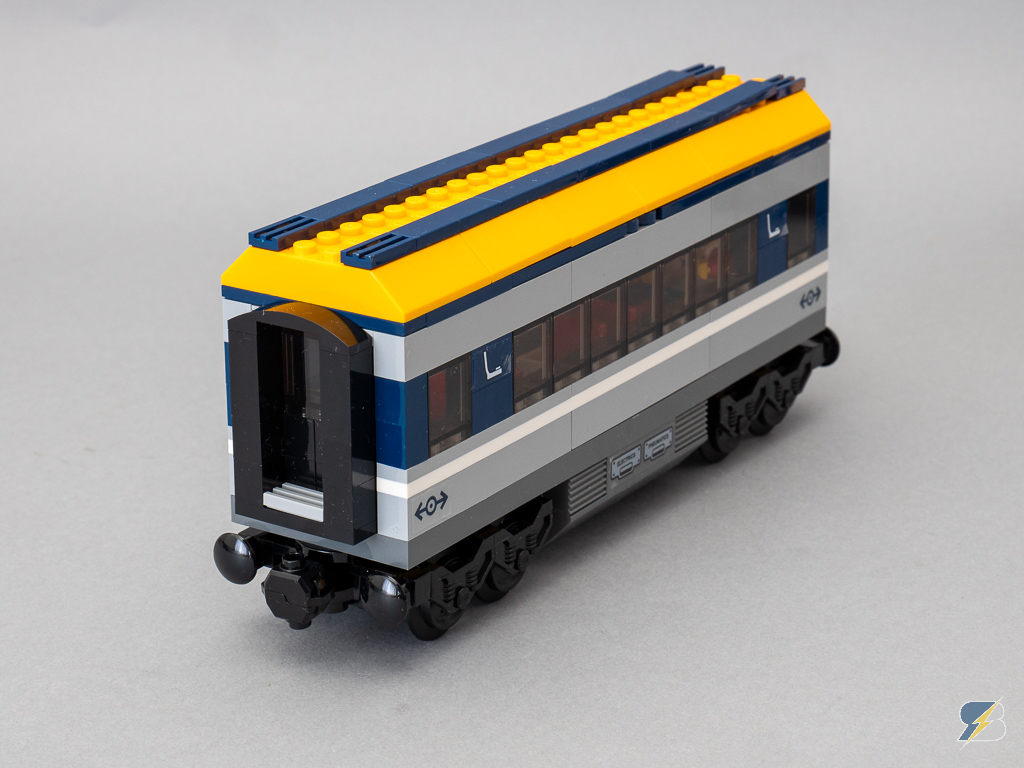 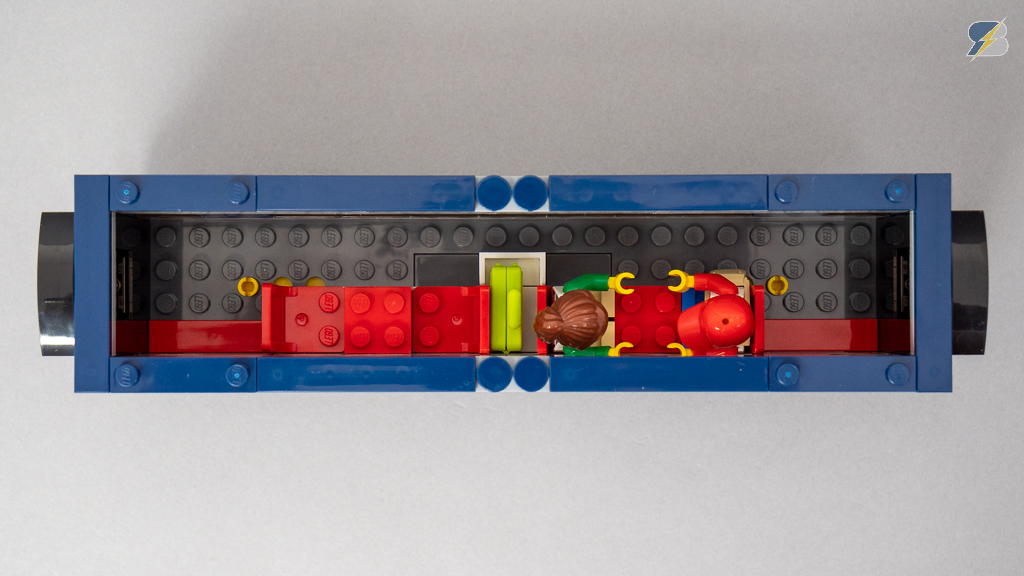 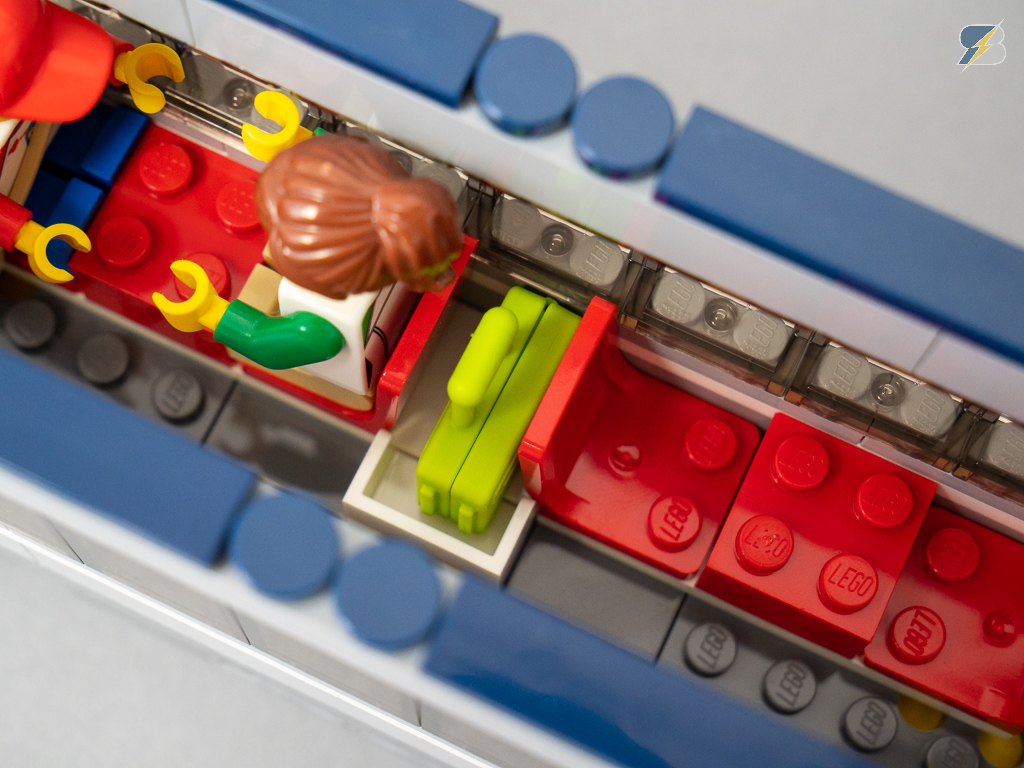 To see how the train is operated including the pairing process, how to switch channels, what is the top speed of the train, how to control and what additional features you get with the app check out this section of the video review:

You can also see here how this train compares with the older Power Functions equipped 7938 Passenger Train. Apart from the different controls their operation and top speed is pretty similar.

To summarize my experience with the set:

This website uses cookies to improve your experience while you navigate through the website. Out of these, the cookies that are categorized as necessary are stored on your browser as they are essential for the working of basic functionalities of the website. We also use third-party cookies that help us analyze and understand how you use this website. These cookies will be stored in your browser only with your consent. You also have the option to opt-out of these cookies. But opting out of some of these cookies may affect your browsing experience.
Necessary Always Enabled
Necessary cookies are absolutely essential for the website to function properly. This category only includes cookies that ensures basic functionalities and security features of the website. These cookies do not store any personal information.
SAVE & ACCEPT
Best Cyber Monday LEGO deals OMG show me!
>>> CYBER MONDAY >>> RacingBrick all instructions bundle 60% OFF OMG I WANT IT!