Thanks to the folks at Promobricks we have some high resolution photos of the new train sets. This one is especially interesting as we can see the new battery box/BT receiver, the app and the controller. 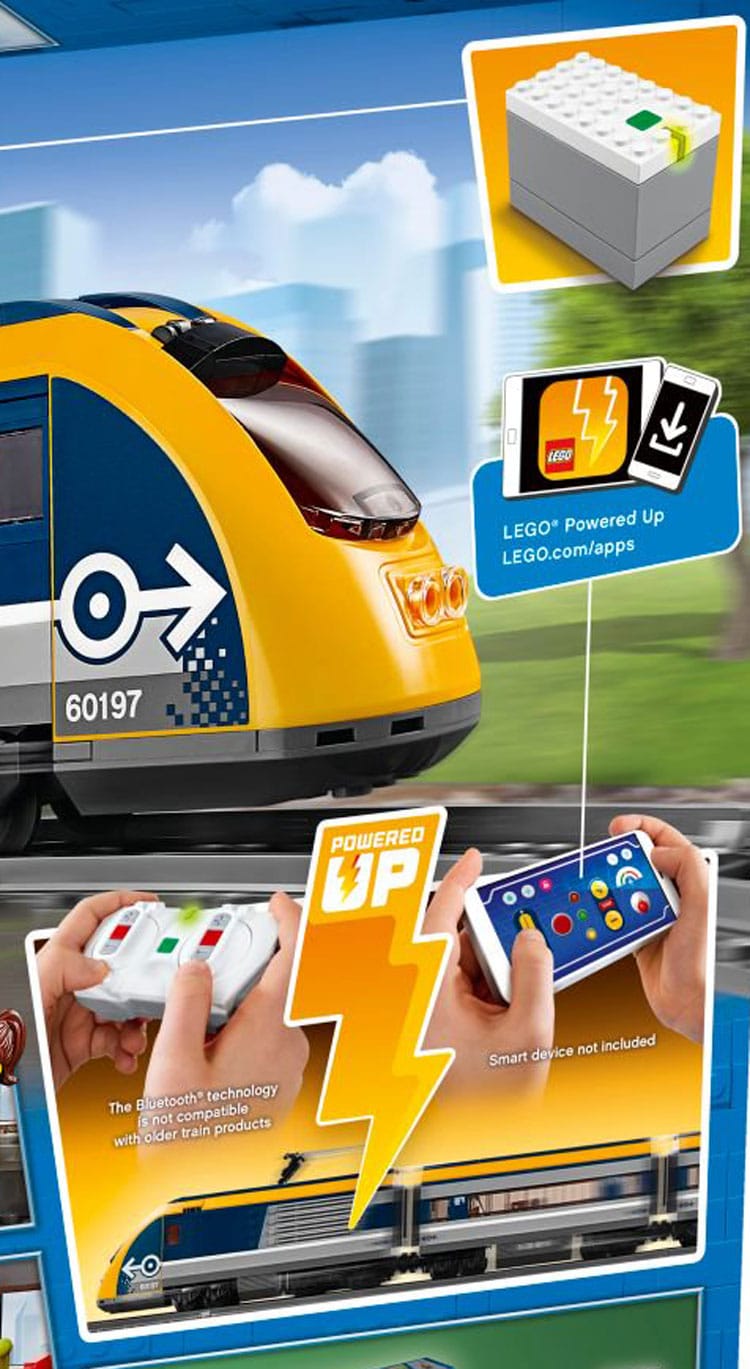 If we check the new central unit the form factor seems to be similar to the old one so there won’t be any problem integrating into some older sets based on that. One interesting thing we can see (actually we cannot see) is the placement and type of the connectors – there’re no visible connection points on the top. This means they’re probably on the other shorter end of the unit which is something new and it means a change in the connection type and the overall form factor (you’ll need more space at that end of the unit for the connectors).

We can also see the new controller that was visible before on the front of the box – the circular part around the buttons can be rotated, we need more details to see how that works exactly. One interesting warning visible below that – “The Bluetooth technology is not compatible with older train products”. This confirms the technology used for the Powered Up platform and it is some sad news for the folks who were still expecting Bluetooth and IR support in the controller.

There’s also a sneak peek of the train controller app. Besides the controls themselves it seems to provide feedback about the speed of the train and various other things, can’t wait to have a closer look!

Update – based on the image in this article found at The Brother’s Brick, the connectors are similar to the ones of the Boost system. There are two ports visible on the Batmobile, I wonder if the trains’ unit will have a similar amount and if any port replication will be available. We received some information about the new Powered Up platform itself in the press release published by The Brother’s Brick about the new app-controlled Batmobile.

You can read the full press release below with the most interesting parts in bold. Based on this I expect the new Powered Up platform to work across various devices and at multiple levels – simple physical/app control, light coding and control via Boost programming. It will be exciting to see if this new platform will be expanded to the Technic theme as well and how the integration will work. 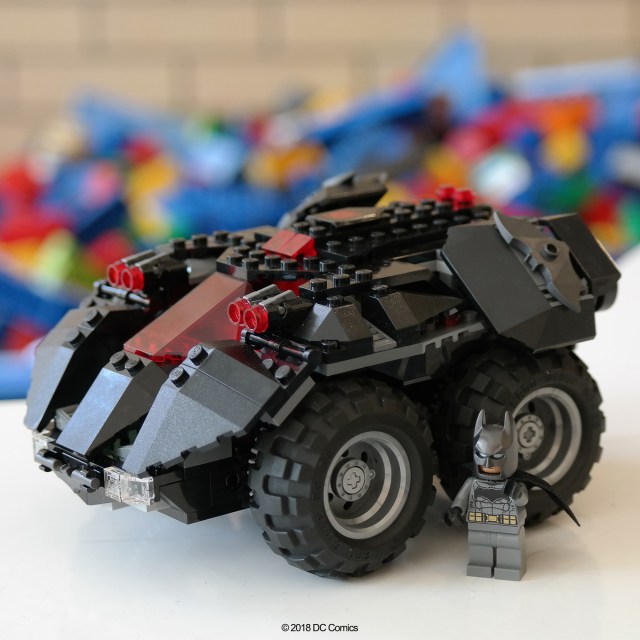 ENFIELD, Conn. (May 17, 2018) – Today, the LEGO Group announced the Powered Up Platform, a suite of new elements and apps, which introduce new ways to bring to LEGO® sets to life seamlessly across its System of Play. Revealed today as part of the Powered Up platform, the LEGO Batman™ App-Controlled Batmobile, inspired by DC’s Caped Crusader, is a buildable LEGO Batmobile that is fully controllable by smart device. It will also incorporate light coding and programming later in 2018.

Leveraging the power elements and coding language developed for last year’s award-winning build and code toolkit, LEGO BOOST, and other LEGO connected toys, Powered Up enabled sets give kids the ability to modify and personalize their experiences by adding dynamic motion control and in some instances simple coding. Powered Up LEGO sets will range from simply powered to remote controlled to smart device connected, creating endless customized play possibilities. Some building sets will ship with Powered Up capabilities included in the box, while others will be Powered Up-enabled, giving kids the option to add power features to their creations if they are interested.

“For 20 years, we have been creating new ways for children to combine technology and LEGO building, starting with the introduction of LEGO MINDSTORMS®, a robotics toolkit that pioneered the idea of a ‘smart toy,” said Michael McNally, senior director brand relations for the LEGO Group. “With Powered Up, we’ve established a flexible connected platform to enable innovative new play experiences that merge digital and physical play in natural ways that will delight and inspire the builders of today and tomorrow – while still focusing on the core physical play proposition of our System of Play – the LEGO brick.”
The LEGO Batman App-Controlled Batmobile, created for children 8 years of age and older, combines LEGO building and remote-control car play. It is the first codeable and programmable LEGO Batmobile that is fully controllable via smart device. Users can steer the Batmobile using one of two preset remote-control interfaces or personalize their experience through a customizable interface. With the interface unlocked, users move sliders, buttons and other elements to customize the remote control to their liking. Through a coding canvas that will be introduced later this year, users can code and re-code speed, direction, sound and duration to program various movements and stunts and create their own unique driving experiences.

The Powered Up Platform launches July 1. The LEGO Batman App-Controlled Batmobile will launch August 1 with the suggested retail price of $99.99 and includes 321 pieces, two motors and a battery hub. The Powered Up App works on phones and tablets running iOS 8.0 and up or Android 5.0 and up.